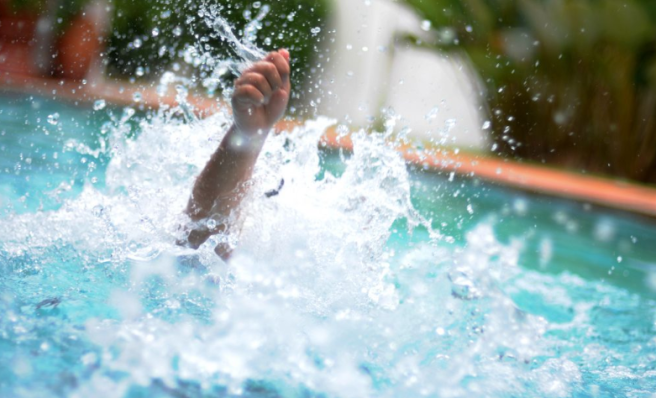 I am not a water guy. I can’t swim. I don’t take long showers. And I haven’t ever jumped in a pond just because others think, “It’s fun”, and that we only live once. Nope. I don’t believe in YOLO. I believe in being sensible, and the undeniable cruelty of nature; floods, famines, and foolishness. In that order.

But the very idea that swimming is not only a recreational activity for arid dweebs but also a tool that you can triumph over in a sassy party thrown by some rich kid, whose dad owns a yacht, had me thinking.

Can I join their club? Shall I learn how to swim? Instead of standing in a corner with a wine glass and a condescending smirk at every other pool party, wouldn’t it be better if I was inside that pool? Refusing any invite with a polite (but a dumb) excuse, wouldn’t it be better if I get to squeeze the yellow duckling, and a pale anorexic babe, whose teeth are brighter than her?

“Yes, yes it would be! You must join a swimming class.”

There is a strong voice in my head that always wants to gamble at the expense of my life. I believe he is a cartoonish midget with a crooked nose. The one who wears a cowboy hat and has a cigar in his mouth. He drags his words and speaks in a magical accent that only I can understand.

And just like every other time, I listened to the midget and shortlisted a few swimming classes. Then I had to narrow it down to one. My criteria of choosing a swimming academy was the same as my criteria of buying, say, a cauliflower; should be neat and fresh looking, shouldn’t smell, and must get me a good bargain.

In a few clicks, I found one, cheaper than the most. The photos on the catalogue promised, “A pool of happiness”. I marveled at the shiny white marbles on their glossy interface. An athlete of a man was captured (or photoshopped) at the time of diving. A girl with curls, held a martini glass while sunbathing on the poolside lounger. A tiny umbrella popped out of her glass. The appeal to me was simple and clear: Come here, chill for a while, and embarrass yourself.

I mean, for a beginner I expected photos of a man with an extra-large tummy, struggling with a swimming kickboard. Or photos of a reluctant toddler being dragged around by the trainer. It would have been good for my ego and confidence. Instead, I was shown the ideal world of swimmers, where one has as many tricks in his arsenal as one needs – to get laid.

The costs that I saved in signing up for this academy came at the cost of a long commute. The place was far from where I live. In fact, when I started in the wee hours of the morning, my struggle was to keep my eyes open and ears focused on the words spoken by the GPS lady. Now, I am a fan of English accents, but not when it’s 5 in the morning. Because then it’s just white noise. And I mean, noise by a white person.

I drove endlessly. And as it turns out, I live at the edge of the city. One wrong direction, and I am out of the city, through the markets, through the isolated warehouses, and through the hell hole – In a different realm.

This realm is still technically a part of the city, but not quite so, when you look around carefully. This is the part of the town where shops begin to have spelling mistakes in their names. And you can spot walls sprayed with the ads of boner medicines and contraceptive pills. In the busy hours, you can also spot people with no teeth sewing torn shoes and women in rags running behind infants with no pants.

At the very edge of the neighborhood, was my soon to be alma mater for water strokes. Inside the building, a man of 30 something, with a prominent hole in his t-shirt and his overall personality, threw a form at me. I penciled in my details. He stapled my photograph on top of it. I gave him cash in advance. He returned me a fake smile and several crumpled 100-rupee notes.

The midget in my head demanded me to punch this guy in his eye sockets. One thing the midget hates is when people treat money, like it’s not really money.

Next, I was in the shower room, my thighs and crotch bundled in a suffocating pair of speedos. Neural micro channels revolting against the grip of the swimming cap, and eyes constantly itchy by the brim of the swimming glasses. I was in an alien costume on a different planet. I felt, this was all pointless. I can still go back and lead a normal life. Fuck pool parties! Because two months from now it will be winters again.

I could foresee my mission getting sabotaged by my will. My confidence was low, my heart beat was high, and I was naked; physically and spiritually.

The world can do with one less swimmer. Right? Wrong! Said the midget. I have very little control over the midget. The midget wants what it wants. He is like a crazy and stubborn girlfriend. Sure, you can say no to him, but he will taunt you for next three weeks and will always be ready to hit you with a, “told you so!” phrase.

So, I walked towards the pool. There were already three assholes frolicking in the center, doing advanced tricks that I did not even know had names. My trainer, a lizard look alike, signaled me to get inside the pool, but I mistook his gestures for a dive. Why did he ask me to dive? I was a beginner. Does he ask everyone else to dive in their first class? Does he not prep them before that? Aren’t there standard first class protocols? I mean, when you go for skydiving, they don’t push you of off an airplane and then tell you about the technicalities on your way down. Do they? They coach you first, make you sign a consent form. And still they dive with you. They don’t just throw you down like a sac of potatoes out of a truck! But because my midget is less of a friendly bacterium and more of a parasite, he too told me to jump right in ­– and so I did.

Now, let me tell you, in my life I have had experiences where I thought I am going to die but I also told myself that it was a temporary experience and that I’ll be fine. Once it was when I had overdosed on herbal hallucinogens. The other multiple times when I accidentally texted something sensitive to a wrong person and saw the blue double tick appear almost immediately. But this dive was nothing like it. I had no time to breathe or blink. I felt my chest and my ears explode like a water balloon. My over confident forearms that can bench press 60 kgs on a given day felt more useless than my appendix. And my legs, that have run marathons, and have carried the weight of my body and soul, floated like a lifeless twig. I kicked around, gasped for breath. My back pulled me inside water.

No, dads of the world, I doubt you all learned swimming when someone threw you inside a pond.

From an aerial view, I must’ve looked like a cockroach when you flip him over. The cockroach tries to paddle in the air the whole night, gets tired, and gives up. Only to be hoovered by your maid in the morning. Or stepped over by you when you wake up for a midnight snack. Millions of years of evolution and the fucker can’t even get back on his feet by himself. But then neither could I. However, in my defense, I was not born aquatic. So I am better than a cockroach. But the ones who aren’t better than a cockroach, are the people inside a public swimming pool. No one swam forward and helped a drowning body of flesh. They continued doing their useless tricks. In fact, all I heard, was bubbles of sadistic laughter, the grimness of the July morning breeze and the voice of my own midget, that said, “You know, you can just stand up on your feet! The pool is like barely 4 feet deep!”

My first instinct is to find humor in petty things, the second, is to move on. When it comes to writing, I let my words and ideas fight each other while I sit back and bet on the one that would let me down first. View all posts by peterosophy

One thought on “Not a Water Guy”

Diary of an ordinary girl